What is worker ownership?

A worker cooperative is a business entity that is owned and controlled by the people who work in it.  They usually invest with a buy-in amount of money when they begin working. Worker cooperatives are equally owned and governed by employees, who also earn money from the profits of their labor. There are no CEOs here making multi-million dollar salaries while workers receive minimum wage. In worker cooperatives, decision-making is democratic, so each worker has one vote, and policies can’t be determined by an investor whose only priority is profit.

A union co-op is a for-profit business owned and directed by workers. This business model utilizes the collective bargaining process and is guided by the core principles of sustainability, solidarity, accountability, and community and is based on the Mondragon principles. 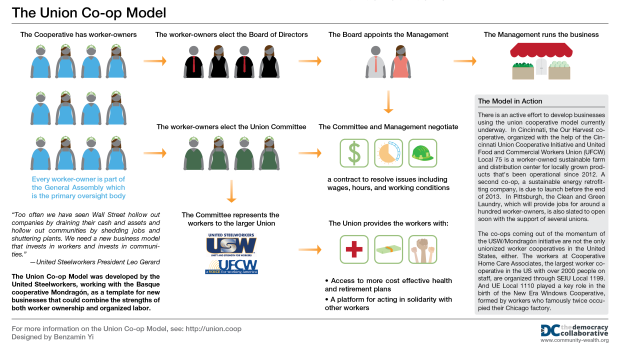 From poverty wages to income equality

However the problem of income inequality is not inevitable. Cooperatives avoid the national trend of income inequality by allowing their worker-owners to decide collectively on their own wages and the wages of their peers. Through democratic participatory budgeting, cooperative worker-owners prioritize the quality of life of all involved in keeping the business going. For this reason, it is often the case that the highest earner at a cooperative does not make more than five times that of the lowest earner.

By prioritizing the livelihoods of all workers involved, it is much less likely to work in a cooperative and still struggle to make ends meet. Working full time and remaining poor is common throughout traditional business enterprises. For example, 30% of full-time workers in LA County earn less than $25,000 a year. However we could see these numbers change with a transition to cooperative ownership structures.

From high unemployment to economic resilience

Cooperatives draw their strength primarily from their bonds to the local, from their personal investment in protecting local employment and the economies of solidarity that exist within cooperative networks.

Unlike traditional business where accountability is held solely to shareholder interests, cooperatives are democratically accountable to the real stakeholders in the economy: the workers themselves.

This distinction is made clear when comparing employment rates is the wake of the global financial crisis of 2008 and the great recession which followed. For example, immediately following the crisis in Spain, job loss in industry was 11.9 percent in traditional enterprises compared to only 6.4 percent in cooperatives, and there has been a growing strategy of job salvation through worker takeover of abandoned enterprises throughout Southern Europe.

Because cooperatives are worker-owned, they hold a core principle of protecting the jobs of their collective worker-owners. This principle is reflected by job retention even during volatile economic times.